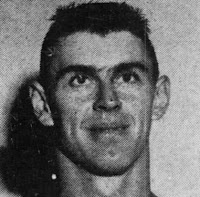 Wager played for four years in the NFL as an end, and once fractured his skull in practice when he kicked himself in the head while punting a football. He served in the army during World War 2.