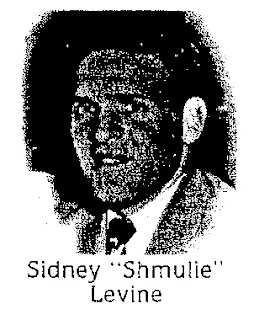 Born to Abraham and Hannah Levine, Sidney attended Fifth Avenue High School in Pittsburgh, but could not play basketball due to having to work during the Depression. He played six years in Pittsburgh's municipal league and also played for the Raiders for their only season. Levine was also a skilled softball player in the Pittsburgh area, too. He worked in the Jewish Community Center in Pittsburgh to tutor kids in basketball.

He married Ethel Laibovitz on July 30, 1944, and they had four children.


Special thanks to Beth Goldman at the West Pennsylvania Jewish Sports Hall of Fame for her assistance in identifying Shmulie.


Stats:
http://www.basketball-reference.com/nbl/players/l/levinsi01n.html
http://www.justsportsstats.com/basketballstatsindex.php?player_id=levinsi01
Posted by Peach Basket Society at 4:48 AM