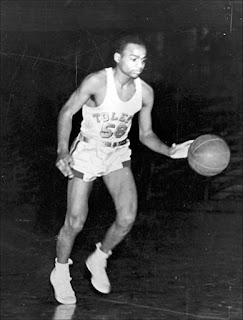 Jones was one of the ten black players to break the color barrier in the NBL. After many years of playing in the Toledo area, he moved to Los Angeles where worked for many years as the industrial director for the L.A. Urban League, pushing the city to hire more minority employees at the local transit authority.

Stats:
http://www.basketball-reference.com/nbl/players/j/joneswi01n.html
http://www.justsportsstats.com/basketballstatsindex.php?player_id=jonesbi02
Posted by Peach Basket Society at 5:33 AM

Email ThisBlogThis!Share to TwitterShare to FacebookShare to Pinterest
Labels: 1942-43, over 90, Toledo Chevrolets