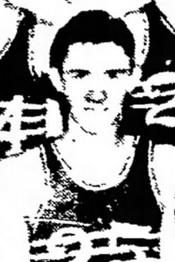 
Played one game for Cleveland.

Found Thomas W. Becker from Dover. He fits the bill, played HS basketball at Dover HS, played around at Akron and found his way to Cleveland. Good fit, declaring it so.

He could also be Thomas George Becker (1923-1993) from Vermilion, Ohio. It's closer to Cleveland, but I don't think it is him. This Tom Becker played HS football, but no sign of basketball anywhere.

Stats:
http://www.basketball-reference.com/nbl/players/b/becketo01n.html
http://www.justsportsstats.com/basketballstatsindex.php?player_id=becketo01
Posted by Peach Basket Society at 5:48 AM