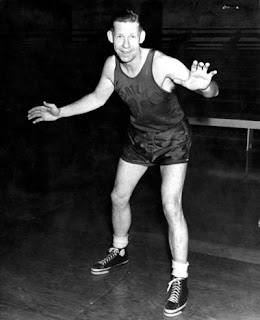 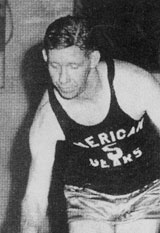 Born in Cook County to Gustav and Helena (Beckman) Roos.

Roos played semi-pro basketball, football and baseball during the 30's and 40's.
Named player/coach for the Waterloo Hawks in the PBLA, the league disbanded after Waterloo played six games, so Roos headed back west and took over the reigns for the Portland entry in the Pacific Coast League, playing as well as coaching. He was also very involved in softball in the
Portland area in his later days. He remained in Portland the rest of his life, working as a salesman for Zidell Enterprises. In January of 1979, Roos went to see the Portland Trailblazers take on the Denver Nuggets. He had a heart attack while at the game and died that night.

"I loved Harry; he was a Chicago guy from the word go, real rough-and-tumble. Everything about him was tough; he had scars on his face. But he was a real nice guy."
- Ty Lovelace, former teammate (Portland) -

Stats:
http://www.basketball-reference.com/nbl/players/r/roosha01n.html
http://www.justsportsstats.com/basketballstatsindex.php?player_id=roossw01
Posted by Peach Basket Society at 4:45 AM