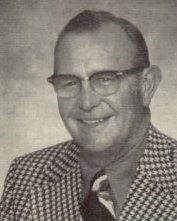 Only information outside of his NBL career was that he played at UNC. However. no Kramer (or Cramer) appears on the all-time roster for UNC. So I am thinking that information is likely incorrect.
There was a Bob Kramer who played for the 1940 Hammond Tech championship team, so I looked into him. Sure enough, I found this link from the Hammond Sports Hall of Fame. This puts him in Oshkosh at the right time, so now we have an identity. He died between 1968 (he is reference as umpiring a baseball tournament in 1968) and 1989 (when he was inducted in the Hammond HOF as deceased.)
Given the gap in his NBL career, it looks like he probably served in the military in World War 2.

I received information from the Hammond Hall of Fame with regards to his date of death, and from there, found his birthdate.

Stats:
http://www.basketball-reference.com/nbl/players/k/kramebo01n.html
http://www.justsportsstats.com/basketballstatsindex.php?player_id=kramebo01
Posted by Peach Basket Society at 10:44 AM