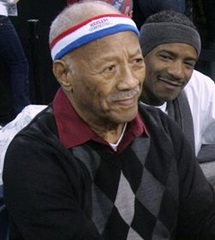 Born in Detroit to Bernard and Mabel Price. As a kid, the family moved often between Toledo and Chicago. He and his brother Bernard both wound up with the Harlem Globetrotters. After his playing days, Al worked for the city of Toledo as a draftsman.

He was married to Edith (d.1994) and they had four children; Al, Gregory, Thomas and Debra.

Stats:
http://www.basketball-reference.com/nbl/players/p/priceal01n.html
http://www.justsportsstats.com/basketballstatsindex.php?player_id=priceal01
Posted by Peach Basket Society at 10:34 AM

Email ThisBlogThis!Share to TwitterShare to FacebookShare to Pinterest
Labels: 1942-43, over 90, Toledo Chevrolets