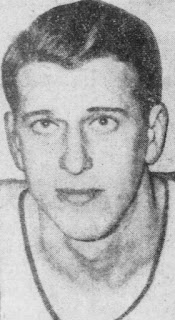 Hartman played on March 11 against the Chicago American Bears, then took ill with pneumonia and never recovered, dying on March 25. (The Kane Republican from March 26, 1946, says he died "yesterday", indicating the 25th.) His headstone has 1920 listed as his birth year. Tragically, his parents outlived all three of their children, as Pierre's brother Philip died in 1951 at 36 years of age, and brother Hiram died in 1966 at 49.

Hartman is the first active NBL player to die.

Pierre was married to Margaret Florence McHugh in September of 1945.

Stats:
http://www.basketball-reference.com/nbl/players/h/hartmpi01n.html
http://www.justsportsstats.com/basketballstatsindex.php?player_id=hartmhu01
Posted by Peach Basket Society at 7:50 AM