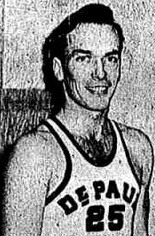 
Not much information known at first.

Looks like he attended Marquette before transferring to DePaul
http://wiki.muscoop.com/doku.php/men_s_basketball:anthony_kelly

Born to Edward and Mary Kelly. Married to Muriel. Served in the military during World War 2.


Stats:
http://www.basketball-reference.com/nbl/players/k/kellyto01n.html
http://www.justsportsstats.com/basketballstatsindex.php?player_id=kellyto02
Posted by Peach Basket Society at 6:53 AM