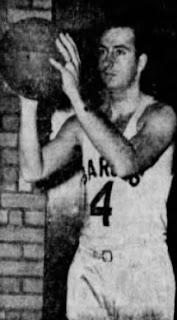 Many basketball encyclopedias say Ray is the brother of another pro basketball player, Ken Corley. This is not true. Ray is from New York, and Ken is from Oklahoma.

Born to Thomas and Mary Corley, Ray graduated from St. Peters in New York and enrolled at Notre Dame. After one year at Notre Dame, where he was on the basketball team, he followed coach Elmer Ripley to Georgetown when Ripley took the head coach job there. After three great seasons at Georgetown, Corley went on the play in the NBA and the ABL.

Ray married Stella Tarica had a set of twins and a set of triplets along their seven children.

Stats:
http://www.basketball-reference.com/players/c/corlera01.html
http://www.justsportsstats.com/basketballstatsindex.php?player_id=corlera01
Posted by Peach Basket Society at 6:20 AM