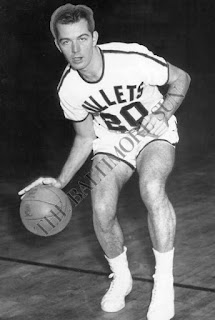 Barnhorst graduated from high school before entering the U.S. Army during World War 2. After the war, he attended Notre Dame, starring on the basketball team. He would go on to enjoy a four-year career in the NBA where he was a two-time All-Star. First playing with the Stags, he was sold to the Olympians after the Stags folded. Leo spent three years with the Olympians until they, too, ceased operations. He played one more year, splitting the season between Baltimore and Fort Wayne. After his playing days, he worked for many years as an insurance agent. Leo endured lymphoma for many years before finally succumbing to the disease in 2000.
Leo was married to Shirley Freihage (1926-2011) and they had three sons and a daughter.

Posted by Peach Basket Society at 3:47 AM