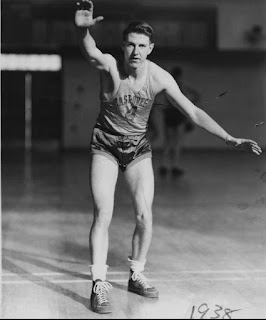 
Born to Paul and Mabel Smith in Hood River, Oregon, Frank was a basketball player at La Grande High School before heading off to Eastern Oregon College of Education. His education was interrupted by the U.S. Navy. During World War 2, served with the Seabees and was stationed Iceland, and then in Saipan in 1945. He returned to Eastern Oregon and finished his education and played pro basketball with Astoria and the Portland. After getting married, he moved into teaching and coaching.

Posted by Peach Basket Society at 9:57 AM