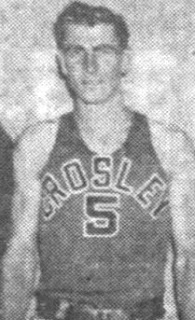 The lanky athlete played basketball and baseball in high school, and tried his hand at minor league baseball after graduating. He signed with Nashville in the Southern Association in 1938. During this time, he also played some pro and semi-pro basketball. After serving World War 2, Salisbury went to Ball State where he got his teaching degree, graduating in 1953. After many years of teaching and coaching, he ran for the Indiana House of Representatives unsuccessfully in 1970. He tried again in 1994, at 77 years of age.

Stats:
http://probasketballencyclopedia.com/player/salisbury/
Posted by Peach Basket Society at 7:38 AM