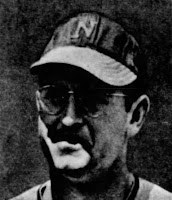 Howard served in the U.S. Navy for seven years, being discharged in 1944. He immediately went to the baseball diamond, signing to play with the Nashville Vols baseball team as a first baseman. He had been offered a deal with the Yankees' farm team in Norfolk, Virignia, but chose to stay in Nashville. He was sold to Lockport in the PONY league before being released. From there, he moved to play with Kinsport in the class-D Appalachian League.

Howard's athletic dreams were hampered by numerous run-ins with the law. In spring of 1945, he confessed to multiple burglaries and larcenies. He would escape from the county jail in 1952, only to be captured a short while later.

Posted by Peach Basket Society at 11:30 AM