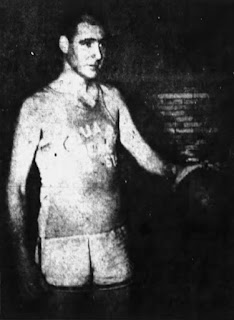 Mallory, 6'6 230-pound player from Logan County, Kentucky, Mallory was 6'2 at the age of 13.He played basketball at Austin Peay and the University of Tennessee before serving with the U.S. Navy during World War 2. He was able to make a court while stationed at sea. After the war, he was the part-owner, head coach and occasional player for the Nashville Vols of the Southern League in 1947-48. He returned as head coach the next season, and was optimistic with the leagues propects in the summer of 1949 when the league officially disbanded.

He would go into coaching and teaching, and would eventually served as a high school principal in New Albany, Mississippi. He also made a decent living as a humorist, with various speaking engagements throughout the Mississippi Valley.


Jess married Edna Dickson in 1941 and the had one daughter. Edna died within a month of Jess

Posted by Peach Basket Society at 11:50 AM