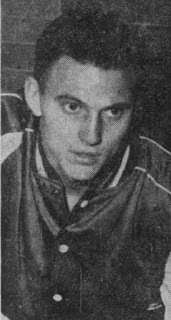 Redmond entered the military after high school to serve his country during World War 2. After the war, the former high school football and basketball star received scholarship offers from 5 SEC schools but chose to attend Tennessee Poly (now Tennessee Tech). He left school early do to financial hardship, he left school early and played basketball for the Nashville Vols for the two seasons the Southern Basketball League was in existence. He would become one of the more well-known football coach in Tennessee High School athletics, coaching for forty years at various Tennessee school.

Ken and his wife, Joyce, had five children.

Posted by Peach Basket Society at 7:36 AM