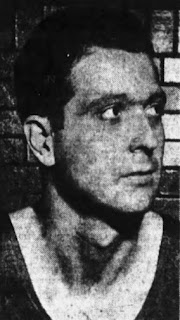 Deward Compton, a lanky athlete from rural Tennessee, received the nickname "Foots" due to his size 15 feet. He lead small Kittrell High School to the Tennessee State Championship game for basketball and would enter the military for World War 2. After serving, he went to the University of Kentucky before transferring to Louisville. After graduating, he played pro basketball with the Nashville Vols in the Southern Basketball League. He would coach at his old high school as well as working for the Murfreesboro Frieght Lines for 32 years. He would eventually move to Abilene, Texas, to live with his daughter, where he died in 2001 at 80.

Posted by Peach Basket Society at 7:31 AM