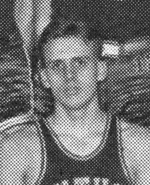 Cooper started the 1944-45 season with Kentucky but did not return after the first semester ended. He would play with the Nashville Vols in 1948-49. He wound up working as a machinist for General Electric for 35 years.

Cooper married Izora Hinson and they had one daughter and one son.

Posted by Peach Basket Society at 7:33 AM