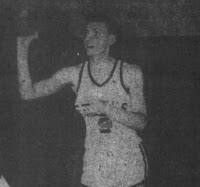 Born in Fort Wayne, Indiana, Spiker's family moved to Philadelphia around 1941. After high school, Spiker joined the U.S. Army and served in the Air Corps during World War 2. After the war, he played semi-pro basketball around Philly where he caught the attention of the ABL's Baltimore Bullets. Spiker signed with the Bullets of the ABL in the summer of 1947 and was sent to Montgomery where he would play with the Rebels for two seasons, trying to impress Bullets' management enough to bring him to the big league. He never made it to the Bullets, and left basketball to work for many years as a journeyman tool and die maker.

Posted by Peach Basket Society at 3:51 AM