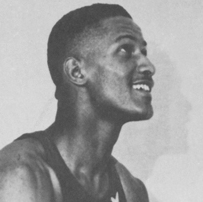 Son of Negro League baseball player Oliver Marcell, Ziggy was a popular player for various independent pro teams who also played briefly with the Fircrests in the Pacific Coast League. He was a fixture in the Los Angeles basketball scene in the 60's, organizing and coaching various teams.

Source:
http://www.blackfives.org/players/everett-ziggy-marcell/
Posted by Peach Basket Society at 6:16 AM