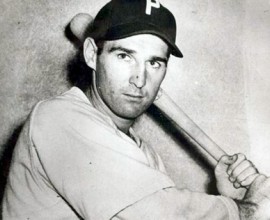 After graduating from UBC, where he had played baseball, basketball, soccer, hockey and football (!), Reg signed with the Vancouver affiliate of the baseball's Boston Braves. He played professional basketball with the Hornets and in the spring of 1947 signed with the Brooklyn Dodgers and played baseball in their farm system through 1950, batting .334 over his minor league career. He also played pro football for the Edmonton Eskimos in the CFL.
His star on the rise as far as the baseball diamond was concerned, Clarkson contracted rheumatic fever. The damage the illness did his heart ended his professional baseball career. He returned to school to get his Masters in Social Work, and has a fighter for prison reform and women's rights in British Columbia.

Reg married Peggy in 1952 and they had eight children.

Posted by Peach Basket Society at 10:34 AM