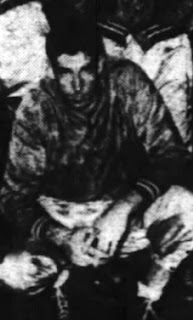 Born in Oklahoma to David and Cleo McRae, the family moved to Salem around 1925. McRae was a star center for the Salem HS basketball team, and during World War 2 served in the Army Air Corps, stationed in Anchorage, Alaska. After the war, he entered Williamette college and played basketball there and also with local AAU teams. McRae, whose name is sometimes listed as either "Alan" or "Allen," was rumored to join the Spokane Blazers on February 7, after the merger of the Spokane Orphans and the Salem Blazers. I am NOT sure if he ever played, though. "Big Al" was a pilot and fight instructor for many years, as well as being an insurance salesman until he retired in 1982.