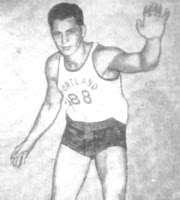 Teyema was one of the more skilled athletes in Portland in the 40's and 50's, playing football, basketball and baseball. He played baseball and basketball on the professional level, with two years in the PCBL and three years of minor league baseball. He also served in the military in World War 2.

He married Marilyn Dodge in 1954 and they had two sons.

Source:
Posted by Peach Basket Society at 8:22 AM

Email ThisBlogThis!Share to TwitterShare to FacebookShare to Pinterest
Labels: MiLB, over 90, PCBL