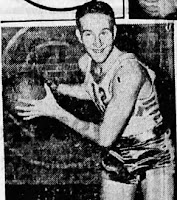 
Born to Harry and Mabel Chase, Bill (5'11, 185 pounds)  played basketball at Washington State and after graduating, he played some AAU basketball before entering the U.S. Army and served during World War 2. He would play basketball in the Pacific League after the war before embarking on a career in the sporting goods industry. He would retire in 1983.

Bill married Helen Jean Hicks in 1943 and they had two caughters.

Posted by Peach Basket Society at 8:13 AM