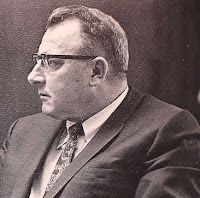 Born to Thomas and Georgia Carmody, L.G. (the initials stood for nothing) and the family moved to Ellensburg, Washington, in 1935. Carmody graduated for Ellensburg HS and enrolled at local Central Washington College. After World War 2 broke out, Clipper served in the Air Corps. He returned to college after the war, and was one of the best fullbacks in college football. He returned to CWC to coach football and in 1969 was appointed to the school's board of trustees.

Posted by Peach Basket Society at 6:59 AM