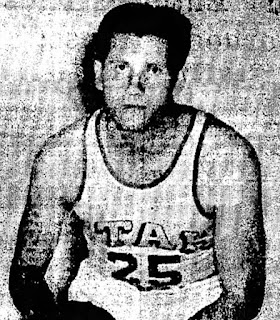 During World War 2, Howard served in the USMC. A guard at Utah, Howard was declared ineligible in January of 1946 and went to play AAU basketball. Howard joined the Portland Indians in the Pacific League and was transferred to Spokane on January 3, 1947.


Source:
Posted by Peach Basket Society at 5:10 AM