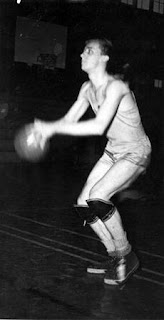 I found his middle name and date of birth thanks to military records that showed him being 6'4. This was close to the newspaper stories that claimed 6'6. Listed as being a student in BC at the time, so everything lined up. I found a partial deathdate, too. And a new photo.

Posted by Peach Basket Society at 6:06 AM