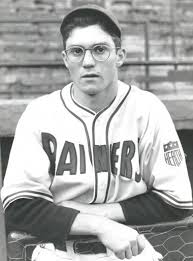 Born to Melvin and Helen Torgeson, Earl Torgeson was a baseball star around Snohimish. He signed with the Seattle Raniers in 1941. With unusually good speed for a guy his size, Torgeson played well for the Raniers before entering the U.S. Army after the 1942 season. After the war, where he received a Purple Heart in the Battle of the Bulge, Torgeson returned to the Raniers in 1946, and after a soild season was sold to the Boston Braves of the National League. In that off-season, he signed with the Bellingham Fircrests of the Pacific Coast Basketball League, but was released around December 20, 1946.
Off to Boston in 1947, Torgeson began what would be a 15-year career as a Major League first baseman, with stops in Detroit, Philadelphia, Chicago and New York after Boston. Earl was a tough ballplayer with no fear of throwing a punch. He worked in the front office of the Seattle Pilots in 1969, and in 1972, was elected Snohomish County Commissioner. He was charged with defrauding the county, but was found not guilty. Unable to get re-elected, he later worked as the county's director of emergency management. He was 66 when he died from leukemia in 1990.

He and his wife, Molly, had three sons and a daughter.