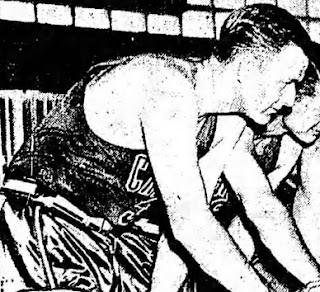 Born to Hyland and Myrtle Grimmer in Paducah, Kentucky.

Served in the U.S. Navy during the World War 2, the Korean War and the Vietnam War.

After the war, Grimmer signed with the Chicago Stags of the BAA, and trained with the team prior to the 1947-48 season, but was cut before opening day. He then signed on with the Colonels in the short-lived PBLA.


Stats:
http://www.justsportsstats.com/basketballstatsindex.php?player_id=grimmhy01
http://probasketballencyclopedia.com/player/hy-grimmer/
Posted by Peach Basket Society at 7:41 AM