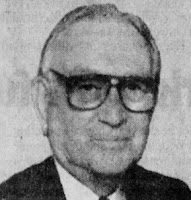 Growing up in Parks, Oklahoma, Benson entered the U.S. Navy in 1943, and finished his education after World War 2. He played for the Drillers before embarking on a 35-year career working for Haliburton. He died of cancer in 1997.

He and his wife Vivian had one son.

Stats:
www.justsportsstats.com/basketballstatsindex.php?player_id=bensoca01
http://probasketballencyclopedia.com/player/calvin-benson/
Posted by Peach Basket Society at 4:38 AM