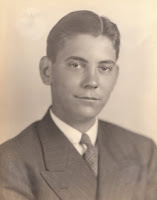 
Born to William and Bonnie Fitton in Oklahoma, Bob and the family moved to Anderson in 1924. After high school, Fitton spent World War 2 in the Naitonal Guard, working to build airplanes for the war effort. We worked at the Davidson Oil Company for 37 years.

He married Jeanne in 1946 and they had one daughter.

Stats:
http://www.justsportsstats.com/basketballstatsindex.php?player_id=fittobo01
http://probasketballencyclopedia.com/player/bob-fitton/
Posted by Peach Basket Society at 5:59 AM