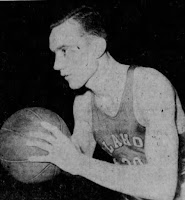 Born to Alla and Viola Paine, Harrah, Oklahoma. Allie's father, a farmer, was murdered when he was robbed walking home after dropping off cotton to be sold. Served in the U.S. Army during World War 2. He starred on the court in High School and College before entering the U.S. Army. A knee injury lead to his discharge, and he worked in an airplane factory to help with the was effort. He played pro basketball with the Drillers and the Dons, and was later the head coach at Phillips University.