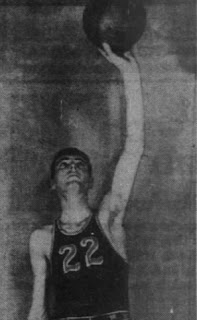 
He later was a president and founder of Goodsports, a charity to help people in need. He worked for many years as a sales manager for Great Lakes Beverage. He died in 1987 after a length illness.

He married Mary Ann Wrenn in 1946 and they had three daughters.

Stats:
http://www.justsportsstats.com/basketballstatsindex.php?player_id=krallbi01
http://probasketballencyclopedia.com/player/bill-krall/
Posted by Peach Basket Society at 11:51 AM