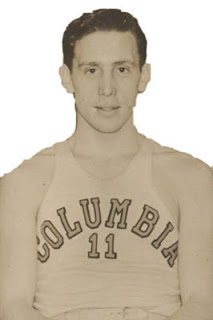 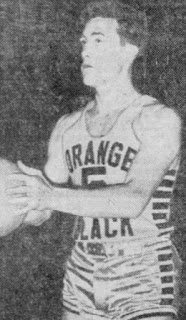 Born in Brooklyn to John and Celia O'Brien. He attended St John's Prep before heading to Columbia, where "Columbia Jack" would lead the Ivy League in scoring on the court. His father, John O'Brien Sr, was a founder of the ABL, and he joined the league after graduation. He enjoyed a long stint in the ABL, with a quick stop for Goodyear in the NBL before heading back east where he wound up a player/coach. After his playing days, we remained competitive in recreational sporting activities, and also officiated games in the NBA for years. O'Brien worked as a plant manager at ARGO in Berlin, Connecticut, as well as personnel director at Sitex Corporation in Hartford. A long-time resident of Windsor, CT, he was heavily involved in youth athletics in town and the high school football stadium was named for  him after his passing.
He married Lynn Harris (1921-2014) in 1948 and they had five sons, William, John, Michael, Jerry, and K.C., and a daughter, Charron Russo.

Stats:
http://www.basketball-reference.com/nbl/players/o/obriejo01n.html
http://www.justsportsstats.com/basketballstatsindex.php?player_id=obrieja01
Posted by Peach Basket Society at 8:25 AM