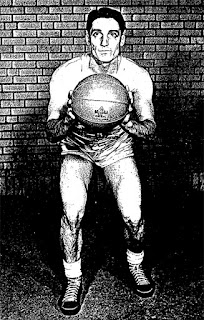 Born in 1918 to Ervin (1892-1965) and Ida (1894-1976) Dro, Bob was a baseball and basketball player at Berne HS and then Indiana. He put in a season with the Kautskys and also played one season of minor league baseball in the Brooklyn Dodgers' farm system but an injury brought that to an end.
In 1957, Dro joined the IU athletic department where he stayed for 27 years. He died in 2006 after battling Alzheimer's Disease. He was married Jean Weber (1919-2006) in 1941, who died not even two months after her husband. They had two sons, Robert and Daniel.

Stats:
http://www.basketball-reference.com/nbl/players/d/droro01n.html
http://www.justsportsstats.com/basketballstatsindex.php?player_id=drobo01
Posted by Peach Basket Society at 6:03 AM