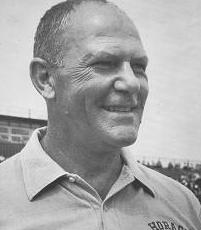 In high school, Elser lettered in football, basketball and track. He played all three at Notre Dame, and set 23 records for the shot put. After college, Elser played one season of professional football for the Boston Shamrocks of the old AFL. After a brief appearance in the NBL for Toledo, Elser entered the U.S. Navy to fight World War 2. He was a longtime football and track coach at his alma mater, Horace Mann HS.
Elser died of a heart attack in his car at 55 years of age in 1968. He and his wife Margaret had two daughters, Donna and Elizabeth.

Stats:
http://www.basketball-reference.com/nbl/players/e/elserdo01n.html
http://www.justsportsstats.com/basketballstatsindex.php?player_id=elserdo01
Posted by Peach Basket Society at 4:39 AM