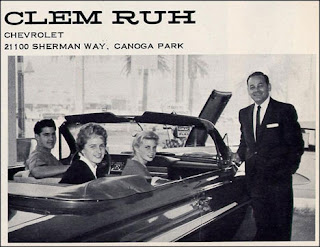 Born to August and Lillian Ruh, Clem was a member (along with Buttercup Anderson) of the Anderson High basketball team that won the state title in 1935. He moved on to USC, and returned to Hammond to play with the Ciesars. After his basketball days, he operated a Chevrolet dealership in Canoga Way in California, until his death in 1973. He was very active in the local community, and the Canoga High School named their football complex after Ruh when the family donated $25,000 in Ruh's name as a memorial.
He was married to Bette (1918-1995)

Stats:
http://www.basketball-reference.com/nbl/players/r/ruhcl01n.html
http://www.justsportsstats.com/basketballstatsindex.php?player_id=ruhcl01
Posted by Peach Basket Society at 4:56 AM