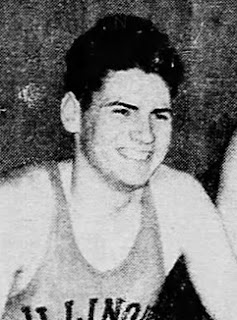 Born to John Paul and Irene Drish in Chicago, Drish played basketball and baseball at Illinois. He played one season in the NBL for the Bruins and went into the U.S. Army for World War 2. He worked as an engineer at Illinois Bell after the war. In 1956, along with his wife, Dorothy (1921-1991), he formed the Citizen`s Committee for Employment, which was an organization that helped convicts get back into society. Later he and Dorothy founded the Safer Foundation, which dealt with the same societal issues. The couple also were dedicated foster parents, caring for over 100 foster kids over the years as well as their own.

Drish died in 1977 at the age of 56. He and Dorothy had a daughter, Dorothy Drish O`Halloran, and five sons, John, Jim, Larry, Bob Devenport and James Costanzo. 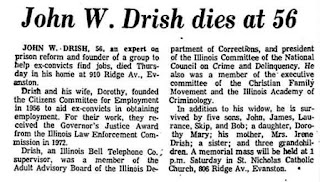 Stats:
http://www.basketball-reference.com/nbl/players/d/drishjo01n.html
http://www.justsportsstats.com/basketballstatsindex.php?player_id=drishjo01
Posted by Peach Basket Society at 5:22 AM