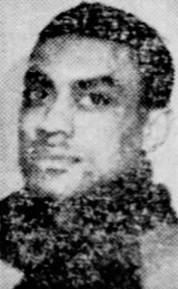 Born to Starling and Ardinia Boswell in Mississippi, Boswell, one of the first black players in the NBL, grew up in Toledo. After high school, he joined the Globetrotters where he was known for his deep shooting. After his playing days, he managed a hotel in Chicago and owned a bowling alley on the South Side. Boswell died suddenly of a heart attack at home in 1964. He was only 45.

Stats:
http://www.basketball-reference.com/nbl/players/b/boswewy01n.html
http://www.justsportsstats.com/basketballstatsindex.php?player_id=bosweso01
Posted by Peach Basket Society at 4:28 AM

Email ThisBlogThis!Share to TwitterShare to FacebookShare to Pinterest
Labels: 1942-43, Chicago Flyers, under 50