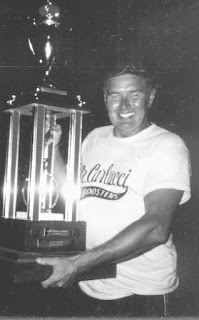 A skilled athlete at Mt Carmel, Morse went to Marquette on an athletics scholarship but left to play professional basketball. World War 2 came up, and Morse enlisted in the Army. However, Morse would make his real impact on the sporting world in softball. He was an innovator of the 16' softball game, and was inducted into the sport's Hall of Fame.
Morse died in 2012 of pulmonary disease.
He married Mary Jane Reilly and had a son, Joseph, and three daughters; Donna Kelly, Barbara McKenzie and Bonnie Shatkus.


Stats:
http://www.basketball-reference.com/nbl/players/m/morsege01n.html
http://www.justsportsstats.com/basketballstatsindex.php?player_id=morsege01
Posted by Peach Basket Society at 5:34 AM

Email ThisBlogThis!Share to TwitterShare to FacebookShare to Pinterest
Labels: 1941-42, Chicago Bruins, over 90