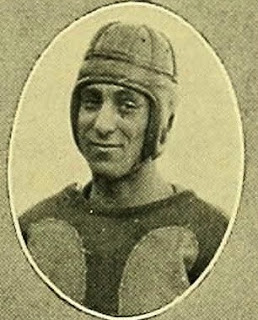 
Yourist was born in Russia to David and Sophia Yourist, and the family immigrated here shortly after Abe was born. He grew up in Toledo where Woodward was a high school athlete. Yourist was a four-sport star at Heidelberg, playing football, basketball, baseball and ran track. He played pro basketball on Babe Dridrikson's All-Stars and the Crimson Coaches as well as a brief appearence with the Toledo Chevrolets. He also was a professional wrestler for many years, including under the names Pepper Gomez and the Masked Marvels. He retired from wrestling around 1970. He also worked for Fenton Aluminum Sash in the Seattle area for 22 years. He had lived in Seattle since 1948.

Yourist died in 1991 after falling in his home. He married Irene in 1937 and had a son, Harry, and a daughter, Sharon.

Many places state he played professional football for the Bears and other teams, but the only record of him playing pro football is with Passaic in the AFA in 1936.
http://www.profootballarchives.com/1936aapas.html

Nothing to indicate he played for the Bears (or any NFL team) at all.

Stats:
http://www.basketball-reference.com/nbl/players/y/youriab01n.html
http://www.justsportsstats.com/basketballstatsindex.php?player_id=youriab01
Posted by Peach Basket Society at 6:15 AM