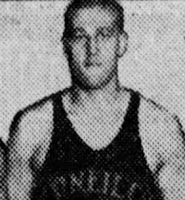 Played one game with Hammond. His name was previously listed as Bill Summers, but the boxscore of the game from the Akron Beacon Journal indicated it was actually Sumerix and he had been a well-known basketball player around the Akron area for many years. The trail was a little hard to follow, but I was able to piece together a little bit of his playing career, and eventually found his parentsm Clyde and Lillie. Clyde was a notable bowler in the area, too. A little more poking and I found where he worked, and a birth announcement for his daughter. His wife, Bernice, died in 1990, and her obituary said Bill was deceased. His father's obituary said he was alive, putting him as dying between 1971 and 1990. Plus, his dad's obituary also said he was living in Jenkinstown, Pennsylvania. Back to ancestry, where I got a full identity.

Born to Clyde (c.1890-1971) and Lily Summerix, Sumerix was a prominent basketball player in Ohio. When the Hammond Ciesars headed to Akron to play the Firestone in a NBL game on February 18, 1941, the Ciesars needed two players to join the squad and signed Sumerix and another Akron local player, Tom O'Toole, to play for them in the one game.

Sumerix worked in the mill room at General Tire in Akron, and aside from being a good basketball player, he was a skilled golfer, too. He later moved to Jenkintown, Pennsylvania.

His middle name might be his mother's maiden name, Herthneck. We only know the initial at this point, but it was a common custom at the time to use mom's maiden name as a middle name. 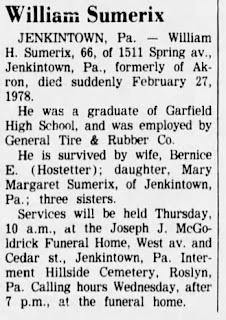 Stats:
http://www.basketball-reference.com/nbl/players/s/summebi01n.html
http://www.justsportsstats.com/basketballstatsindex.php?player_id=summebi01
Posted by Peach Basket Society at 7:55 AM