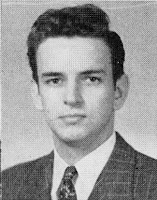 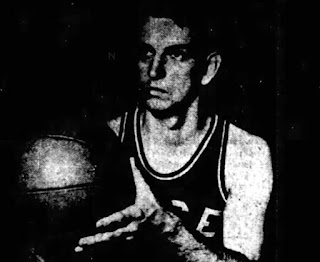 After graduating from Jeff Davis HS in Houston, Switzer served in the U.S. Navy during World War 2 (I am assuming his naval training is why he was at SW Louisiana in 1943-44. After his release from the service in August of 1946, Switzer enrolled at Rice. After 4 years at Rice where he scored over 1000 points, Switzer signed with the St Paul Lights on July 26, 1950.

At some point he was let go by the Lights prior to the start of the season, and played with the independent Ponies of St. Joseph. He signed with the Anderson Packers, making his debut with the club on November 4, 1950. He wound up coaching the freshmen basketball team at Rice a  couple of seasons, and was working as an insurance agent when he died of a heart attack in 46 years of age.

Warren was married to Ursula.

Stats:
http://www.justsportsstats.com/basketballstatsindex.php?player_id=switzwa01
http://probasketballencyclopedia.com/player/warren-switzer/
Posted by Peach Basket Society at 8:06 AM