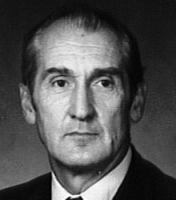 Born in Pettisville, Ohio, to Andrew and Inez Weber, Stan and the family moved to German Ohio around 1930, and Stan joined in the U.S. Army after high school. He served in Hawaii during World War 2 as a cook. Returning from the war, Weber went to Bowling Green wher ehe played basketball. He was drafted by the Knicks in 1950, but chose to play for the Waterloo club in the NPBL. After the league folded, he joined the Toledo Mercuries, who were a touring opponent of the Harlem Globetrotters. After a year on tour, he returned to Ohio and worked for many years as a teacher and coach in Rossford, Ohio.

Stats:
http://www.justsportsstats.com/basketballstatsindex.php?player_id=weberst01
http://probasketballencyclopedia.com/player/stan-weber/
Posted by Peach Basket Society at 11:53 AM