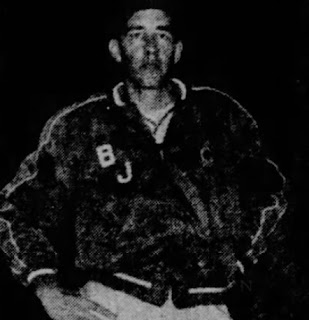 McMillen was the star pitcher on the baseball team at Mizzou, and also played on the basketball team for a couple years. He signed with the New York Giants of baseball's National League in June of 1949, and was immediately sent to the Class-B club in Trenton, New Jersey. He stayed in the Giants system through 1952, but never got higher than A level. In the off-season of 1950-51, he played with the St. Joseph Ponies, and when they merged with the financially-strapped Hi-Spots in the NPBL on December 8, 1950, he played five games for them.

Stats:
http://www.justsportsstats.com/basketballstatsindex.php?player_id=mcmildo01
http://probasketballencyclopedia.com/player/don-mcmillen/
Posted by Peach Basket Society at 5:21 AM