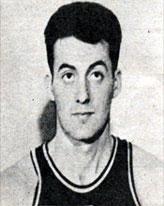 After graduating from Alexandria HS, Hal joined the U.S. Navy where he served his country during World War 2. After the war, he enrolled at Hamline where he lead the school to the NAIA all four years, including the title in 1949. He signed with the St. Paul Lights in the NPBL, and when they folded, he was moved over to the Waterloo Hawks. He returned to St Paul where he worked as a teacher and a coach for 30 years.

He married Cheris Otte in 1949 and they had one son and one daughter.

Stats:
http://www.justsportsstats.com/basketballstatsindex.php?player_id=haskiha01
http://probasketballencyclopedia.com/player/hal-haskins/
Posted by Peach Basket Society at 10:50 AM