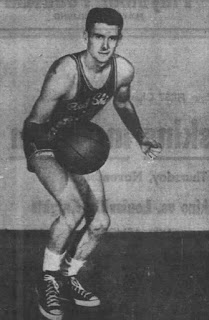 Flinn was born in Nebraska but grew up in Huntley, Wyoming. A star on the Wyoming basketball team in the late 40's, Flinn played for the Redskins in 1950-51 before entering the U.S. Air Force, where he used his physical education degree to train servicemen. He wound up building a sizeable restaurant franchise empire, owning 19 restaurants around the western United States. Flinn died of congestive heart failure in 2006.

He married Marge Heinz in 1950 and they had two daughters.

Stats:
http://www.justsportsstats.com/basketballstatsindex.php?player_id=flinnar01
http://probasketballencyclopedia.com/player/arnie-flinn/
Posted by Peach Basket Society at 5:20 AM