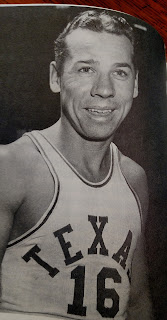 Madsen grew up in Milwaukee and after high school, he played some AAU basketball before entering the U.S. Navy at the beginning of World War 2. He managed to play at various naval stations between deployments, and was discharged in 1945. Having enjoyed his time in Texas, he decided to stay there for college. He went to the University of Texas, where he was one of the "Mighty Mice," the Final Four Longhorn team with many players, including Madsen, under 6 feet tall.

Stats:
http://www.justsportsstats.com/basketballstatsindex.php?player_id=madseal01
http://probasketballencyclopedia.com/player/al-madsen/
Posted by Peach Basket Society at 10:35 AM