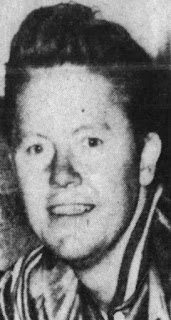 Born to Elmer and Kathraine Fowler, Fowler played at Missouri before a brief professional basketball career. After playing with the Kansas City Hi-Spots, he headed east and signed with the Utica Pros when KC went under. In the off-season, Fowler signed with the Milwaukee Hawks in the NBA, but was let go after a month. He returned to the ABL, signing with the Elmira Colonels. He played for Elmira for two seasons, but was sidelined in early 1953 with appendicitis. He played a few years, touring with the Harlem Globetrotters.

Stats:
http://www.justsportsstats.com/basketballstatsindex.php?player_id=fowleje01
Posted by Peach Basket Society at 8:12 AM