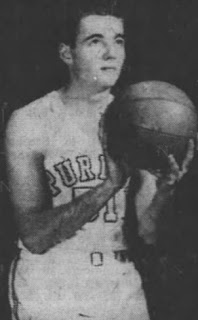 Butterfield was a basketball star at Bosse HS, playing on two state championship teams, before heading to Purdue. After graduating from Purdue, he played in the NPBL for the Agogans, but went on to Harvard Business School. He went to work at Smith and Butterfield, an office supply store in Evansville partially operated by his father. He eventually rose to become the president in 1966, and expanded the company into photofinishing by creating the subsidiary, Snap Photo Service. A fire in 1967 destroyed a large part of the company's structure, and after a few years of trying to recoup financially, the company was split and Bill became CEO. Eventually, he would leave to work for K-Mart for a few years before returning to S&B and the company would later merge with Champion Industries.

Stats:
http://www.justsportsstats.com/basketballstatsindex.php?player_id=buttebi01
http://probasketballencyclopedia.com/player/bill-butterfield/
Posted by Peach Basket Society at 8:02 AM